Convert your AVI videos to MP4 with ease and completely free.

How to convert AVI to MP4 online 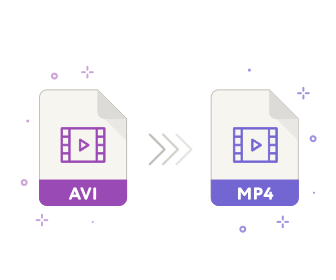 The AVI format is also known as Audio Video Interleave. This is a RIFF media container developed by Microsoft in 1992. This format contains video and audio data encoded by different codecs, as well as AVI files contain compression standards for multimedia data.

Files with the .avi extension are most often used for storing and playing videos since this format has good picture quality with relatively small file size, but still, if you compare it with the MPEG or MOV format, then AVI files have a lower compression ratio.

This format has become popular among Internet users, as it is supported by almost any players and codecs, as well as video editing programs.
File type: Video
File extension: .avi
Developed by: Microsoft
Initial release: 1992
MP4

The MP4 or MPEG-4 Part 14 format is a media container developed by Apple in 2001, which can contain audio and video files, as well as static images and text (for example, subtitles).

Files with the extension .mp4 are very popular because they have a high level of file compression while maintaining high-quality video and audio. The main feature of the MPEG media container is that it does not have data encoding, therefore it is easily played in any codecs and players, and on any devices. Also, this format allows you to broadcast streaming data, so it is widely used for online broadcasts on the Internet.